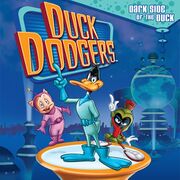 Duck Dodgers is an animated TV series spin-off based on the iconic original Looney Tunes cartoon “Duck Dodgers in the 24½th Century” starring Daffy Duck. Airing on Cartoon Network, the show ran from August 2003 to November 2005. Heavily expanding on the lore of the original cartoon, the show’s premise follows the bumbling and comedic adventures of Capitan Duck Dodgers and his Eager Young Space Cadet (played by Porky Pig) in defending the galaxy from multiple interstellar threats and disasters.

Dodgers goes up against Long John Silver XXIII in a slug eating contest.

After eating the rest of the crops, one of the Martian gophers swallows the last turnip whole.

After Dr. Ignatious wakes up Duck Dodgers and criticizes his lifestyle, Duck Dodgers boasts about being in the best shape of his life, followed by his belly suddenly dropping to the ground.

To deal with an obnoxious boy in his storefront, Skunderbelly begrudgingly gives him an entire container of free ice cream.