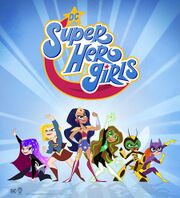 DC Super Hero Girls is a 2019 television series based on the franchise of the same name, having a separate continuity from the 2015 web series. The show follows the teenaged versions of six superheroes—Batgirl, Wonder Woman, Supergirl, Zatanna, Bumblebee, and Green Lantern Jessica Cruz—all students at Metropolis High School. They try to become real heroes while also dealing with the stresses of everyday life.

Giganta eats 93 pies at the eating contest, but is still the first to lose.

Supergirl eats lots of turkey legs, getting a bloated belly by the time of the joust.