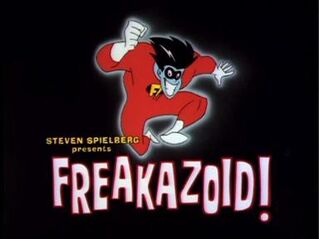 Freakazoid! is an American animated series created for Kids' WB by Bruce Timm and Paul Dini. Steven Spielberg was the executive producer. Like Animaniacs, it became a cult hit.

The titular character is the superhero alter ego of Dexter Douglas, a teenage geek who was sucked into his computer by a bug and gained all the information from the Internet. As Freakazoid, he battles for righteousness, all the while being completely nuts.

And Fan Boy Is His Name/Lawn Gnomes: Chapter IV – Fun In The Sun/Frenching With Freakazoid (S01E04)

In this episode, Freakazoid tells a story about a young girl named Sally who, after losing her best friend Mary to the "wrong crowd", climbs into a tree and begins binging on cookies until she grows as large as the tree, to her parents and several others' surprise.