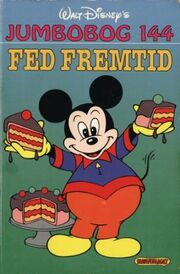 Mickey Mouse has appeared in over 250 comic publications around the world. While Donald Duck is more popular in comics, Mickey has been featured in comic books, magazines and newspapers, the latter finishing in the early 1990s. Many of these comics have faded into obscurity, but information can be found in the Inducks database.

Mickey's horse Tanglefoot eats the hay at a store that Mickey hasn't paid for yet.

Minnie gets nightmares of Mickey fattening her up after having a midnight snack.