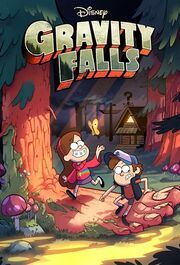 Gravity Falls is a Disney animated series created by Alex Hirsch, premiering in 2012. For summer vacation, twins Dipper and Mabel Pines are sent to Gravity Falls, Oregon to stay with their great-uncle ("Grunkle") Stan, who runs a tourist trap named the Mystery Shack. Dipper finds a mysterious journal that contains information about supernatural and paranormal happenings in the town, leading him and Mabel on adventures to uncover the local mysteries.

Mabel eats too much Smile Dip and hallucinates.

In a game of "Spin the Person," Pyronica eats Hectorgon whole.

In the story "Don't Dimension It," Mabel ends up in MAB-3L, a dimension where alternate universe versions of herself have gotten trapped, including a fat one.