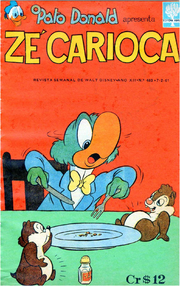 José Carioca (Zé Carioca) has a long-running comic book series exclusive to Brazil, due to his popularity in that country. Its first recognized issue is #479, published in 1961, and has since continued to run throughout the years, currently reaching 2,500 issues.

José gains weight after being fired from a laboratory.

In order to win the role of the Carnival King, José must gain weight, ending up as fat as his friend Pedrão.

In this strip, José has eaten every fruit on Pedrão's tree.

José and his friends help Santa Claus when he is not fat enough.