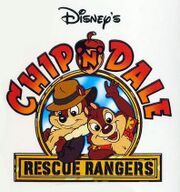 Chip 'n Dale Rescue Rangers is a cartoon series based on Walt Disney's characters Chip 'n' Dale that was created by Tad Stones and Alan Zaslove, previewing in August 1988 and officially broadcast from March 1989 to November 1990.

It depicts Chip 'n' Dale as crimefighters in a detective agency of their own called Rescue Rangers, consisting of them as well as their new mouse friends Montgomery Jack and Gadget Hackwrench, and a housefly named Zipper.

All of the Rangers get stuffed after discovering space food.

As Rubber Bando, Dale uses a fire hydrant to roll over to a burning house and extinguish it.

Chip is blowing up a balloon while the Rangers are setting up Montgomery's birthday party, but when Montgomery arrives too soon the balloon blows back into him, causing him to wreck the party.