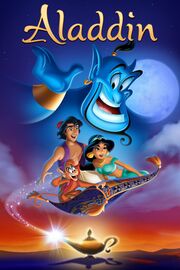 Aladdin is a media franchise created by the Walt Disney Company, based on the original Arabian folk tale. It started with its first film in 1992, later gaining sequels, a television series, and more. It follows the adventures of Aladdin, who is a street urchin, as well as his love interest Princess Jasmine, monkey partner Abu, and the magical, wisecracking Genie.

Genie jiggles his belly to make it bigger, lifts it up, and then asks Aladdin if he looks different to him.

Aladdin and the King of Thieves

In the intro, Genie as a pig, bloats up before he bursts into confetti.

Genie pumps himself into a huge balloon to block the moon.

Genie takes a deep breath to blow away a spirit.

Abis Mal tells a story about Aladdin, and alters the story to make Aladdin fat and weak.

Genie drinks a lot of water from a bowl to take down a snake made out of sand.