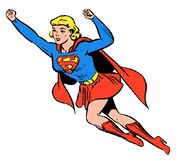 Supergirl is a superheroine in the DC Comics universe, created by Otto Binder and Curt Swan in 1959 with the intention of being a female counterpart to Superman. Unlike Superman, the identity of Supergirl has been associated with several characters over the years, starting with his cousin, Kara Zor-El.

As Linda, Supergirl gets fattened up by Mr. Mxyzptlk with the powers of Red Kryptonite, and so, using her flight ability, disguises herself as one of the fair's balloons.