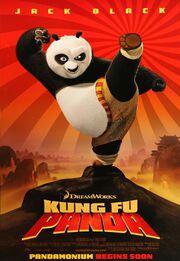 Kung Fu Panda is a franchise created by DreamWorks Animation, starting with the first film in 2008. Sequel films have been released, as well as short films, television series, video games, and comics. It takes place in a version of ancient China populated by anthropomorphic animals. The protagonist is Po, a panda with a love for kung fu. While he may be clumsy, he is actually the prophesied Dragon Warrior, a great kung fu master.

Mantis attempts to heal an ill Shifu with acupuncture, but accidentally makes him swell up with the first needle.