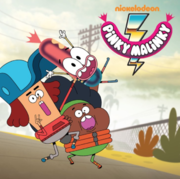 Pinky Malinky is an American animated series for Netflix produced by Nickelodeon Studios. The series premiered on January 1st, 2019.

In the trailer Pinky Malinky, the title character, gets so over hyped that he inflates himself, he asks for help, later Babs deflates him.

When the grocery store runs out of popins, while Pinky freaks out out he starts to pop which causes him to inflate.

Pinky has a double day, while getting two food and after eating them Pinky is seen visibly bloated.