Oh Yeah! Cartoons is an American animation showcase that appeared on the Nickelodeon cable 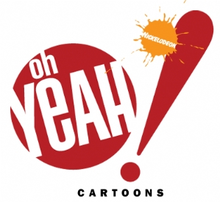 Hargus, Jelly's cousin drinks a shaken soda. The shaking causes him to inflate and then he belches and cause a tidal wave.

Jamal's sister, Polly drinks a lake of milk that belonged to a fish who was having a milkbath.