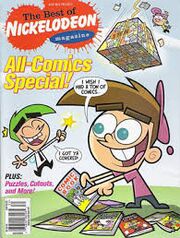 Nickelodeon Magazine is a children's magazine created by the television channel of the same name. The magazine originally ran from 1993 to 2009 and has since been rebooted in June 2015 by Papercutz.

The magazine featured many articles and comics related to the Nickelodeon cartoons, but also featured comics that were completely original, including: Impy & Wormer, Grampa and Julie, Patty-Cake, Fiona of the Felines, among others.

In order to curb her cravings for the new class mouse, Fiona gorges herself on kitty treats.