The Animal Crossing: New Leaf manga is a comic by Ryohei Ohsaki published in the magazine CoroCoro Ichiban, based off the franchise by the same name. Not much is known about it in English speaking countries but it has become known online for its odd surreal humor very unlike the games that inspired it. 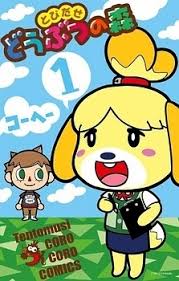 Isabelle becomes giant and eats the moon, causing her to bloat up.