Super Smash Bros. is a fighting video game series created and published by Nintendo. The series is directed by Masahiro Sakurai. The series is a crossover between many Nintendo all-stars, as well as some third-party characters.

Super Smash Bros. is the first game in the series. It was released for the Nintendo 64 in 1999.

Kirby's Neutral-B, Inhale, allows him to eat an opponent. He may either swallow the opponent to copy their Neutral Special, or he may spit them out as a projectile. Kirby also inflates for his double jumps, and whenever he eats an object.

Jigglypuff from Pokémon appears as a playable character. It inflates for its double jumps. 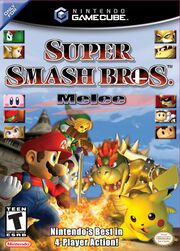 Yoshi reappears from Super Smash Bros.. His Neutral-B attack is Egg Lay. For this attack, Yoshi eats an opponent, turning them into an egg for a short amount of time. The more damage the opponent has accumulated, the longer they are stuck inside the egg. The opponent may shorten the amount of time spent in the egg by rotating the control stick and button mashing. Unlike in his first appearance, Yoshi visibly bloats up during this move.

Jigglypuff returns as a playable character, with its previous characteristics. 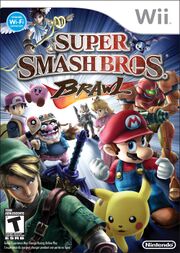 Super Smash Bros. Brawl is the third game in the series, released for the Nintendo Wii in 2008. It was notable for featuring an adventure mode, the Subspace Emissary.

In the E3 2006 trailer, Wario's belly bloats up before he released his signature flatulent move.

Kirby reappears as a playable character in Brawl. He retains his previous characteristics.

Jigglypuff returns as a playable character. It still inflates whenever it double jumps. For its down Taunt, it inflates itself, then blows out the air, flattening itself. For its Final Smash, Puff Up, it blows up to a ginormous size, pushing any opponents off of the stage.

Wario makes his playable debut in Brawl He briefly bloats up when he eats a large object.

Wario's Down-B attack is the Wario Waft. It is an explosive fart that Wario charges automatically. As he does so, his body inflates overtime. It ranges from a small, harmless "poot", to a large, devastating explosion. Here are some more detailed images of it below.

Munchlax is a Pokémon that can be summoned with the Poké Ball item. When summoned, Munchlax will wander around the stage, eating any items that spawn (Trophies, CDs, Stickers, Poké Balls, and Smash Balls are exceptions).

Gulpin appears as a Poké Ball character. When summoned, it remains idle until an enemy draws near. If an opponent makes contact with Gulpin, it will consume the opponent for an small amount of time, dealing damage until it spits the enemy out.

Like the previous games in the series, Yoshi's Neutral-B is Egg Lay, in which he briefly bloats up during the attack animation.

Kirby retains his Neutral Special from the previous games. He can also still float and inhale objects.

King Dedede returns as a playable character. Like in Brawl, his Neutral-B is Inhale. He can also still consume items and projectiles.

Jigglypuff returns as a playable character. It keeps the same moves from previous games, including the ability to inflate itself.

Wario returns as a playable character, still able to eat items. Wario's gaseous Down-B, Wario Waft, also returns in this game, but only this time, Wario doesn't inflate over time. However, his lower body seems to inflate cartoonishly before releasing his gas, mostly his belly and rear.

The Joulion enemy from Metroid: Other M appears as a Stage Hazard on the Pyrosphere. It inflates itself with electrical energy before exploding, dealing damage to any fighters nearby.

The Pooka enemy from Dig Dug appears as an enemy in Smash Run, a mode exclusive to the Nintendo 3DS version. When it takes damage, it inflates until it bursts.

Koffing from the Pokémon series appears as an enemy in Smash Run. It bloats up with toxic gases before expelling them, dealing damage to the player, as well as lowering stats. 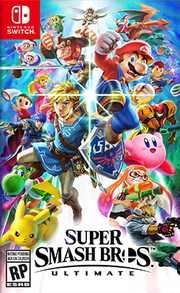 Super Smash Bros. Ultimate is the fifth game in the Super Smash Bros. series. It was released for the Nintendo Switch in 2018. This entry is notable for featuring every previous playable character in the series, even those previously exclusive to downloadable content.

Yoshi still bloats up during his Egg Lay animation.

King Dedede returns with all of his abilities intact.

King K. Rool from the Donkey Kong Country series makes his playable debut in Ultimate. He has a counter attack where he puffs up his belly for a successful counter. He also briefly inflates during his Neutral Air attack.