The Kirby series is a series of video games, created by Masahiro Sakurai and developed by HAL Laboratory, and published by Nintendo. The series stars Kirby, who is known for his ability to inhale and copy the powers of his enemies. 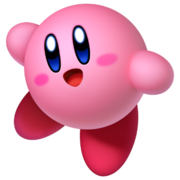 Kirby has the ability to inflate himself to float around.

Kirby's main ability is to inhale his enemies. If his enemy has a special power, then Kirby will copy it when he swallows the enemy.

In some games, when Kirby has the Ice ability, he can use an attack known as Ice Suction. This move allows Kirby to swallow an enemy or object right next to him and spit it out as a block of ice. In the 2D games, Kirby's bloated state during this move has a unique sprite, separate from his Inhale and floating abilities. The enemy that Kirby gains the Ice ability from, Chilly, can also use Ice Suction in the rare instances where he's playable. 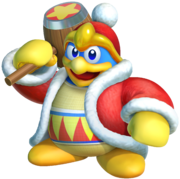 King Dedede is the self-proclaimed king of Dreamland, and is the on/off nemesis of Kirby. Dedede also has the ability to inhale, but he cannot copy abilities.

He can also inflate himself to float around. 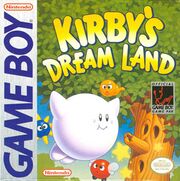 Kirby's Dream Land is the first game in the Kirby series, released in 1992 for the Nintendo Game Boy. In this game, King Dedede steals all of the food from Dreamland. Kirby must defeat Dedede to return the stolen food to Dreamland's citizens.

After defeating King Dedede, Kirby inflates himself to the size of a hot-air balloon to carry Dedede's castle, returning all of the stolen food.

Kirby Super Star is a compilation game released for the Super Nintendo in 1996.

Spring Breeze is one of the games included. Since it is a semi-remake of Kirby's Dream Land, the ending is the same. 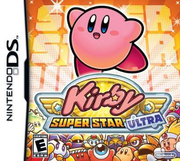 Kirby Super Star Ultra is an enhanced remake of the original game, released for the Nintendo DS in 2008.

Spring Breeze returns as the first game mode, with an updated ending in 3D. 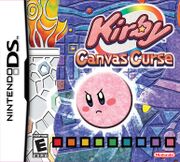 Kirby: Canvas Curse is a game released on the Nintendo DS in 2005. In this game, Kirby is cursed by the witch Drawica, transforming him into a ball. Kirby still retains his ability to copy powers.

The Balloon ability appears exclusively in this game. Kirby can get it by absorbing a Bloon enemy. This ability inflates Kirby into a balloon. If the player taps Kirby with the stylus, Kirby will inflate. Kirby can be tapped up to four times before exploding, dealing damage to any nearby enemies, and returning to his original inflated state. 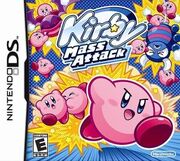 Kirby Mass Attack was released for the Nintendo DS in 2011. In this game, Kirby is split into ten copies of himself by the evil wizard, Necrodeus. The player controls the Kirbys with the touch screen.

Tortletummy is a mini-boss that first appears in Stage 10 of Green Grounds, then reappears in Stage 5 of Dedede Resort. When he is defeated, he will inflate and burst, leaving behind valuable items.

The Decofloof enemy only appears in Stage 10 of Dedede Resort. If a Kirby eats a cake dropped by this enemy, the Kirby will become stuffed and immobile. While this is harmless by itself, it leaves any bloated Kirbys vulnerable to nearby enemies. This effect wears off after a short period of time, and can be ended quickly by tapping on the immobile Kirby. 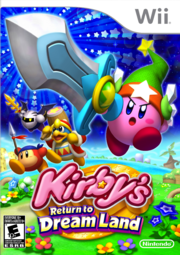 Kirby's Return to Dream Land was released for the Nintendo Wii in 2011. It is notable for featuring four player co-op.

Fatty Puffer is the boss of Onion Ocean. He is a large puffer fish that will inflate himself to crush Kirby. Once half of its health is depleted, it will inflate to an even larger size.

Kirby's Blowout Blast is an expanded version of the Kirby 3D Rumble sub-game from Kirby: Planet Robobot. It was released exclusively for the Nintendo 3DS eShop in 2017.

In this game, if Kirby inhales multiple enemies, or one large enemy, he becomes very bloated, allowing him to spit out a powerful Blaster Bullet.

In Chapter 8, Kirby and King Dedede float down a hole in the ruins.

Kirby: Save the Rainbow Islands!

In Chapter 7, Kirby floats to chase after Pirika, but Gooey is much faster.