Mario & Luigi is a series of role playing games made by Nintendo and AlphaDream. Each game features the titular duo going on an adventure, fighting evil, and doing an assortment of side-quests along the way. 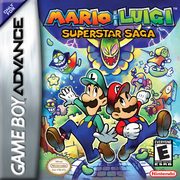 Mario & Luigi: Superstar Saga is the first game in the series, released for the Game Boy Advance in 2003.

Mario also looks like this after getting the Chuckola Reserve needed for Queen Bean.

Two of the enemies inflate in this game. The first enemy, the Cheep Cheep, appears in the Oho Oasis Seabed area. Unlike the main Mario series, the Cheep Cheeps are purple, and they inflate whenever a Bro attacks them, causing poisonous spikes to protrude from the Cheep Cheep. In its inflated state, the Cheep Cheep is known as the Puffer-Cheep, and they cannot be hurt by a Jump attack. The Cheep Cheep/Puffer-Cheep do not appear in Mario & Luigi: Superstar Saga + Bowser's Minions, as they are replaced by the Spiny Cheep Cheep, which does not inflate.

The other enemy to inflate is the Oho Jee enemy, found in Oho Oasis. These strange enemies come in red and blue varieties, and are docile until attacked with the Firebrand for red Oho Jees, and the Thunderhand for the blue Oho Jees. During battle, a Bro can heal the Oho Jee by attacking it with its respective element (fire = red; thunder = blue). If healed too much, the Oho Jee will slightly inflate before blasting off like a balloon. After winning the battle, the Oho Jee will remain in the overworld, and can be fought multiple times. 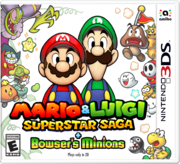 Pump Mario returns in the remake, functioning identically to the original game. Luigi cannot drink from fountains this time, as Mario will always default to the front when drinking.

Mario also becomes bloated with Chuckola Cola in the same way as the original game.

The Oho Jee returns in this game, acting exactly like the original game. 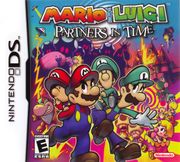 Mario & Luigi: Partners in Time is the second game in the series, released for the Nintendo DS in 2005.

Baby Mario can drink from some fountains to use the Baby Pump ability, which is quite similar to Pump Mario. Ironically, adult Mario is unable to use that ability in this game. 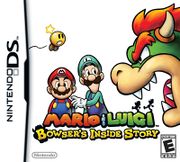 Mario & Luigi: Bowser's Inside Story is the third game in the series, released in 2009 for the Nintendo DS. The game was notable for having Bowser in a starring role.

Dried Bloopers are Blooper enemies that only appear in the Pump Works section of Bowser's body. When Bowser drinks water from a fountain, this area fills with water and turns the Dried Blooper into a Bubble Blooper.

The Air Cheep is a Cheep Cheep enemy that appears in the Airway section of Bowser's body. They will inflate during one of their attacks.

Many Toads are infected with a disease called the Blorbs, making them swell to a large, round size. They are cured when the Miracle Cure is used.

When Bowser returns to his castle, he sees that Fawful has turned it into a theater and brainwashed his minions. Bowser must battle Midbus in front of a live audience. Midbus bloats up his belly for one attack and slowly walks up to Bowser, before winding up a devastating punch. To counter this, the player must punch Midbus's belly multiple times to cancel out the attack

After beating Midbus, Bowser is treated to a banquet and gets fat from eating so much. He gets stuck in the floor, giving Fawful the chance to get Princess Peach out of his body. He literally burns off the weight on the treadmill Fawful and Midbus leave for him.

Mario can become Balloon Mario by inhaling the air from vents, allowing him and Luigi to reach higher spots.

Mario can also become Pump Mario by drinking water from fountains. However, this ability is only used late in the game, unlike previous Mario & Luigi games.

One of the Special Moves the brothers get is Snack Basket. When used, Luigi eats a bunch of falling sweets, becoming huge and bloated. He is thrown in the air by Mario, and creates a shockwave upon hitting the ground. 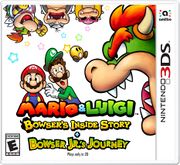 Bubble Bloopers and Air Cheeps return as enemies in their original locations.

Like in the original game, Toads have come down with the Blorbs, causing them to inflate to a massive size.

In the Bowser Jr's Journey side-game, some Goombas come down with the Blorbs, causing them to bloat up like the Toads.

Midbus still bloats up during the battle in Bowser's Castle.

The Snack Basket attack returns for Luigi to use. 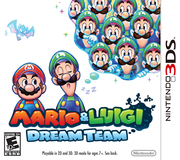 Mario & Luigi: Dream Team is the fourth game in the series, released for the Nintendo 3DS in 2013.

After Antasma is finally defeated, he inflates and explodes.