Pokémon is a franchise consisting of video games, anime and other media owned by Nintendo and created by Satoshi Tajiri. Since 1996 it has become the second most successful video game franchise in the world. The anime series, not sharing the canon with the video games, was first broadcast in 1997 and as of July 2020 has made over 1,100 episodes, spawning 16 movies and counting.

The anime follows Ash Ketchum, a young boy destined to become a Pokémon Master, his group of fellow Pokémon trainers that differs every season, and usually his nemeses Jessie, James and their talking Meowth, three members of Team Rocket determined to steal every Pokémon they find.

Misty's Staryu performs a Water Gun attack into Meowth's mouth, ballooning him up and sending him flying away.

Team Rocket steals everything important to the party, including the Pokémon, the stones and the food. After they do, Meowth and James appear full.

Misty gives a balloon to Jigglypuff to make its lungs stronger for singing, but this doesn't work.

Meowth is served food by islanders who are worshipping him.

Brock and Pikachu appear full from having a meal at a Pokémon Center.

Mini-Dit, Duplica's other Ditto, takes on the form of Ash's Totodile and tries to perform a Hydro Pump attack, but ends up just breathing air because Totodile doesn't know that move.

All the Pidgey that live on Pudgy Pidgey Isle (minus the one named Orville) have grown fat because there are no predators, also making them unable to fly.

A flashback shows that the Pidgey are born small, but grow large from eating so much.

Ash's Totodile wins the fight against Christopher's Kingdra by biting its snout, causing all the water to hold back in its belly and sending it shooting up into the air paralyzed.

In the match between Misty and Harrison, Harrison tells his Qwilfish to swallow water before using a Pin Missile attack.

A girl named Natalie makes Brock a lot of pie.

Ash's Pokémon gorge themselves near the beginning of the episode.

Team Rocket get themselves a job as snack sellers and as a reward are given an all-you-can-eat buffet. They finish it all with very full stomachs.

When May battles Harley in the Grand Festival, Harley's Wigglytuff uses its rubbery body to give May's Pokémon a hard time.

While fighting Ash and Paul, a blackbelt commands his Zangoose to use Fire Blast. It gains a significant belly before shooting fire.

Pikachu and Ash get their distended bellies massaged by Dawn's Buneary and Brock's Happiny after eating a lot.

Team Rocket steals all the food from a buffet restaurant, and Jessie bloats up from it.

Having spent a week working at the Pokémon Summer Academy, Team Rocket seems to be out of shape. However, their stomachs rumble and they stop at an all-you-can eat restaurant, getting even fatter in an instant. They panic and start exercising.

While the gang is eating, Team Rocket prepare a large bag of potato chips for themselves, ending up with swollen stomachs afterwards.

An old acquaintance of the group, Angie, tells them that she would love to have them stay for dinner, but unfortunately she is too occupied with her farm chores. Brock offers to cook instead, and she winds up visibly stuffed after the meal (as do everyone's Pokémon).

Ash ends up stuffed from a meal after finding their Pokémon.

Ash is stuffed after a meal Officer Jenny provides as thanks.

Team Rocket steals the food from the festival, and Jessie ends up with an enlarged belly.

Ash and Pikachu end up stuffed after feasting on sweets.

The Glameow that was stolen by Team Rocket and crushed on by Meowth evolves into Purugly, which is noticeably fatter.

Ash's Oshawott eats the food meant to draw out a Pokémon at the Battle Club.

Iris's Emolga uses Attract on four of Ash's Pokémon to take all their apples - her belly exposes evidence.

Ash appears full after an eating contest with Stephan.

A wild Beartic becomes stuffed after eating a lot of apples.

After stuffing their faces with apples, Pikachu is shown with a content belly.

Ash's Oshawott swipes food from Pignite, who responds with a Flamethrower.

While searching for Iris' Axew, Ash's Oshawott eats a boxful of apples meant for a group of wild Trubbish.

Pikachu and Fletchling stuff their faces when Ash is discussing his rematch plan.

Clemont's Chespin gains weight from eating macarons at a camp dinner, slowing his attacks down. As Clemont invents something to help him lose weight, the Chespin wanders off to a cottage where an old woman is baking some macarons. The old woman takes care of him by letting him have some of her macarons, and Clemont sees this thinking that his Pokémon does not seem to like him anymore after losing so many battles.

However, the old woman uses Chespin for a Pokémon battle againsts her husband's Delphox in order to get him to apologize. Not until Clemont saves his Chespin does the woman realize that the Chespin is too slow, so she agrees to have Clemont fill in for her, and with his help the Chespin dodges so many attacks that he returns back to his normal shape.

In Serena's flashback, Pikachu, Chespin, and Dedenne stuff themselves with the Poké Puffs she made.

As a reward for completing the errand, Clemont gives Chespin as much food as it wants. However, Chespin eats too much and becomes sick.

Ash, Pikachu, and Dedenne are briefly shown stuffed at the beginning of the episode.

During the finals of the Kalos League, Ash faces off against Alain. Alain's Charizard inhales deeply before firing Flamethrower at Ash's Greninja.

Meowth and Wobbuffet become stuffed after eating all the food Bewear offers them.

Pikachu and Rockruff stuff themselves during breakfast.

In the second leg of the Pokémon Pancake Race, James has trouble pulling a disguised Meowth and Wobbuffet, claiming they gained weight from Bewear's food.

Ash and Pikachu end up being stuffed after eating delicious sweets served by Sophocles' mother.

While camping in the woods, Ash and his friends have their energy drained by Morelull when they fall asleep, resulting in them drastically losing weight. Everyone affected recovers to their original size by eating enough, but Ash deliberately stuffs himself.

Later Ash helps feed Morelull by letting it absorb some of his energy as he eats, resulting in the both of them winding up stuffed.

Sophocles, Mallow, Togedemaru, ad Tsareena come across a house made out of sweets and candy while entranced by the Ghost-type Pokémon that invaded the school. They proceed to eat a lot and get really fat, but return to normal size once the illusion fades.

Kiawe's Marowak is briefly seen stuffed after eating the food on Darley's floor of the Kantonian Gym.

Goh's Pokédex entry for Snorlax states that it eats a large amount of food each day.

Kicking It from Here Into Tomorrow! (S23E17)

Goh plans to enter his Magikarp in the Magikarp High Jump Competition, but it has gotten fat. It becomes fit again after a lot of exercise.

Ash winds up slightly stuffed after eating a dinner his mother prepared.

Goh’s Skwovet takes part in an eating contest for Pokémon. During the first round, it is able to avoid filling up too much on berries by spitting the seeds out with its Bullet Seed move. Ash’s Dragonite also competes, but is soon too full to progress to the next round.

Team Rocket sabotages some of the remaining competition: a Vigoroth, a Heatmor, a Swalot, and a Lickitung by feeding them special cookies that expand in their stomachs. Goh’s Skwovet also eats several of the cookies, but is only briefly effected.

As Skwovet struggles to win in the final round, it evolves into Greedent.

Ash becomes visibly stuffed after helping himself to a whole variety of desserts in Unova's Castelia City.

Ash, Goh, Pikachu, and Cinderace are stuffed after dining on curry.

Ash, Goh, and Pikachu eat their fill of tomatoes on Laxton's farm.

Pikachu inflates himself in order to do an impression of Cacnea.

Pokémon the Movie: I Choose You!

After Ash's Charmeleon evolves into Charizard, it fires off a massive flamethrower in victory against Cross' Incineroar. 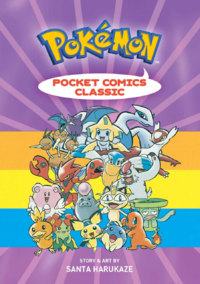 Pokémon Pocket Comics:Classic (Originally ポケモン4コマまんが全集 Pokémon 4Koma Comic Compilation) is a 4Koma compilation by Santa Harukaze. Originally released in Japan in 2005, each comic features a different Pokémon and a gag related to it. Each comic also includes trivia and helpful strategies for Pokémon battles. It was eventually released in the US in 2018 by VIZ Media.

The "Armchair Traveler" story featuring Latios and Latias explains the psychic link between the two Legendary Pokémon. Latios decides to take advantage of this by staying behind on their flights and seeing what Latias sees. Eventually, Latios becomes overweight from lack of flying. 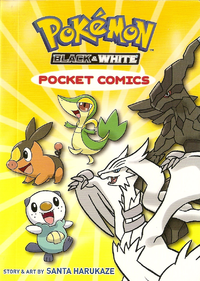 Pokémon Pocket Comics: Black & White (Originally ポケモンBW 爆笑4コマまんが全集 Pokémon Black & White Laughter 4Koma Comic Compilation) is a 4Koma compilation by Santa Harukaze. This compilation mainly focuses on Pokémon introduced in the Pokémon Black Version and Pokémon White Version games. Like other 4Koma manga, these stories feature slapstick and pun-based comedy. It was originally released in Japan in 2011, and was released in the US by VIZ Media in 2013.