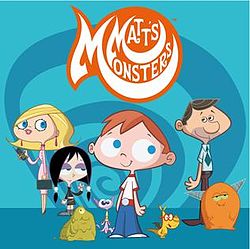 Matt’s Monsters is a Dutch/French/Italian animated TV series created by Jan Van Rijsselberge that has been broadcast on various television networks throughout multiple regions. Beginning in 2008, the series ran with a total of 52 episodes. The show’s premise follows nine-year-old Matt Average in the fictional city of Joliville where various monsters run rampant. Alongside his parents, his next-door-neighbor Manson, and a few well-mannered monsters, Matt runs a agency dedicated to hunting down monsters that cause trouble throughout the city.

A bubble-like monster hides in a water-cooler at Matt’s school, causing its particles to eventually inflate everyone who drinks from it. After realizing the monster just wants to cool down, Matt and co. lure it into a refrigerator, which causes the monster to summon all of its particles from those still infected and deflating them. They send the fridge to Antartica, where the monster then proceeds to inflate several penguins there.