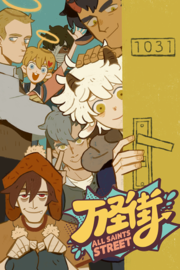 All Saints Street (also known as Wan Sheng Jie) is a Chinese webcomic written by Lingzi, first published in 2016. It has been adapted into a donghua (animated adaptation) with the first series released on April 1, 2020. The series is a slice-of-life work following a group of foreign monsters living in modern day China and trying to adjust.

Be Careful When You Adopt Cultural Practices. (Chapter 34)

Neil tries to gain muscle by eating, but gets fat instead.

Back To Work, But My Soul Is Still On Vacation. (Chapter 161)

Crystal has gained weight over New Year's. She ends up transferring that weight to Neil, Ira, and Damao.

Dreams Are Wonderful, the Journey is Harsh, and the Results Are Off the Mark. (Chapter 195)

Neil joins Crystal in her exorcisms, eating all the spirits they deal with.

Ira has all the water drained from his body, so Neil feeds him a whole water tank.

Christmas is About Spending Time Together (S01E09)