The Old Lady and the Pigeons 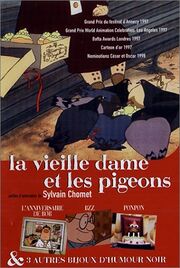 The Old Lady and the Pigeons is a 1997 French animated short film directed by Sylvain Chomet, later known for The Triplets of Belleville and The Illusionist. Chomet's debut film, it earned a Grand Prix award at the Annecy International Animated Film Festival. The short is about a starving policeman who, after discovering an old lady feeding pigeons, disguises himself as a pigeon to have the lady serve him food every day. The more he eats overtime, the fatter he gets.