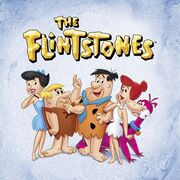 The Flintstones is an American animated cartoon series created by William Hanna and Joesph Barbera which originally ran on ABC from September 1960 to April 1966. The cartoon follows the stone-age suburban life of Fred Flintstone, his wife Wilma, and their neighbors Barney and Betty Rubble in the fictional prehistoric town of Bedrock. As the series progressed, additional characters were added to the cast such as Fred and Wilma’s baby daughter Pebbles, Barney and Betty’s adopted son Bamm-Bamm, and an extraterrestrial being known as the Great Gazoo.

The show’s popularity spawned numerous cartoon spin-off series including: The Flintstone Kids,Cave Kids, and Yabba-Dabba Dinosaurs, as well as television films such as Hollyrock-a-Bye Baby and a cross-over with The Jestons: The Jetsons Meet the Flintstones. Additionally, the series is well known for having its own brand of breakfast cereal known as: Cocoa Pebbles.

Fred tricks Barney into thinking his gardening hose is clogged; saying he ought to blow into it to clear the obstruction. When Barney blows into the hose, Fred releases the water which causes Barney to briefly inflate with water.

The owner of the gym wears a muscle suit inflated by a mammoth so people don't know that the gym's owner is really weak.

Fred’s dinosaur crane, Lulubell, gets filled up with water after Fred accidentally releases a geyser at the quarry.

When a new Donutporium opens, Fred gets hooked on the donuts they sell to the point where he steals some before the store opens the next day.

Fred gets a stomachache after eating everything he wasn't able to when he had a toothache.