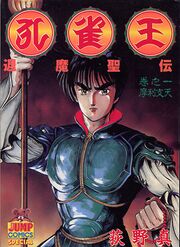 Spirit Warrior is a horror manga by Makoto Ogino, originally serialized in Weekly Young Jump from 1985 to 1989, adapted into two OVAs and followed by two sequel mangas.

The story starts off focusing on Buddhist monk Kujaku, member of an organization of demon hunters named Ura-Kouya, and his many challenges in hunting, but by volume 4 sets him up against the Rikudoshu, an evil organization with plans to make Peacock King and Snake Queen fight, giving birth to the Dark Vairocana.

Under possession by a demon, a woman eats everything out of her refrigerator, later seen with a very distended, pregnant-looking and cursed belly.