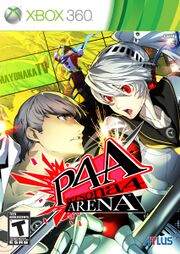 Persona 4 Arena (Persona 4: The Ultimate in Mayonaka Arena in Japan) is a 2012 fighting video game that is also a sequel to Persona 4 and, to an extent, Persona 3. It was developed by Arc System Works under supervision of Atlus. It also received a sequel called Persona 4 Arena Ultimax. Set some time after the events of the previous games, Teddie announces a fighting tournament called the P-1 Grand Prix. This grabs the attention of the Investigation Team and the Shadow Operatives, who both find it suspicious.