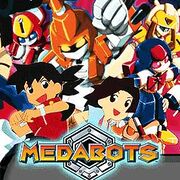 Medabots is an anime series, based on the Game Boy game of the same name, which originally ran in Japan for one year starting from July 1999. Its English dub was provided by Nelvana. A manga was released subsequently and a follow-up series produced by Production I.G., Medabots Spirit, was broadcast a week after its conclusion.

Medabots are artificially intelligent robots meant to protect and serve humanity. The anime centers around Ikki Tenryou, a ten year old boy who purchases a Medabot of whom he calls "Metabee", and since then is willing to participate in any "Robattle" tournament.

Natalie has made octopus balls that everyone seems to enjoy except for Ikki. Natalie eventually gets him to please her by having Ikki stuff octopus balls into his mouth until he ends up looking fat.