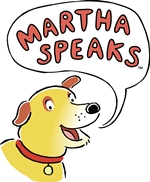 Martha Speaks is an American-Canadian animated series based on the 1992 children's book of the same name. Currently airing on PBS Kids, the show follows a talking dog named Martha Lorraine (voiced by Tabitha St. Germain), who is owned by a 10-year-old girl named Helen.

In the 2nd after-segment, TD inflates when he tries to expand a balloon.

At the end of one of these episodes, Martha gains a little belly due to eating too many biscuits.

Martha and the Canine Caper (S01E07a)

After unwillingly helping a stray dog pack rob a butcher store, Martha helps herself to 3 steaks.

While trying to change her fortune, Martha tries some ice cream that temporarily gives her a bloated belly.

Martha is made to stay in the wagon all night as punishment for scaring the cows. When the cowhand in charge lets her out in the morning they see she ate all their food except for one can of beans. She very briefly appears bloated.

Martha and the One Thousand Fleas (S02E14a

Return of the Bookbots: The Case of the Missing Words (S04E04)

Martha inflates to burp after eating a flood of meatballs.

Another dog named Martha sees a banquet and eats it all.

Martha develops an eating disorder that adds some extra pounds to her.

The Bookbots have become out of shape, but Martha is the only one to have noticeably gained weight. She keeps the weight for most of the episode until they work out.