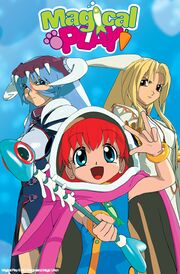 Magical Play is an internet-exclusive anime series directed by Hiroki Hayashi that was webcast from November 2001 to May 2002. A satire on the magical girl genre, it is the story of a 12-year-old girl named Padudu who visits Sweetland to compete in contests and battles, the winner becoming a magical girl.

Zucchini sets up an eating contest for Padudu, MyuMyu and Pipin, coming to terms that MyuMyu's two flat cats, Lyka and Akyl, will get fat instead because she lets them do the job for her. While the others are heavily stuffed, MyuMyu's cats fall off of her body, distracting Zucchini once again.

Padudu uses Uokichi's flesh as a food source, so she makes a meal out of him to see what would happen if all his flesh was eaten. He restores himself the next morning.