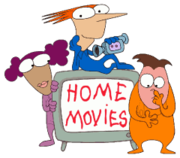 Home Movies is an animated series created by Loren Bouchard and Brendon Small that debuted in 1999 on UPN and finished in 2004 on Adult Swim.

It centers around Brendon Small, named after the series' co-creator, who spends his weeks filming home movies with his friends Melissa Robbins and Jason Penopolis, as well as befriending his soccer coach.

Brendon and Jason have developed an eating disorder (Paula has gained weight as well) that occurs whenever they see each other. When they decide to split up and lose weight, Melissa plans to get them back together.

Brendon eventually meets Jason at an arcade and agrees to buy as much junk food as he can. A month later, the three kids are seen very fat and proud of it, watching their recent home movies.