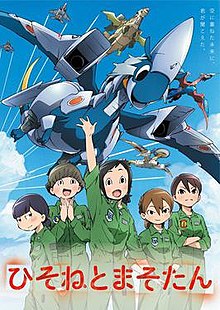 Dragon Pilot: Hisone and Masotan (or Hisone to Masotan) is a anime series created and animated by studio Bones. The story follows the rookie Hisone Amakasu in the Japan Air Self-Defense Force, where she is situated at the Gifu air base. There she is chose to be the pilot by the "OTF" – Organic Transformed Flyer, or dragon who she names "Masotan". To pilot an OTF, the dragon shall swallow the pilot and inside him share a connection that allows them to fly together. All this fateful encounter become a life change for both of them.

In a brief moment, Masotan has swallowed two pilots inside him.