Dig Dug is a video game series created by Namco. The first game was an arcade machine called Dig Dug released in 1982. The objective of each game is for Taizo Hori to exterminate all of the underground monsters in each level. This can be done by popping them with a harpoon gun, crushing them with rocks or using the environment against them.

Every game features Pooka (a tomato) and Fygar (a dragon). Many other unique enemies can be found in the later installments with even Taizo falling prey to the harpoon gun.

Only Pooka and Fygar are featured. Both can be defeated with the harpoon gun.

Pooka and Fygar return from the first game. Their sprites remain the same.

New enemies are introduced to the series. The early stages feature two colors of Pooka, two colors of Fygar, a horned enemy and an exploding robot. Later stages feature fire-breathing dragons, drowsy aliens and a dark version of Taizo Hori that can attack with a harpoon gun. All normal enemies and Taizo can be inflated but bosses cannot. 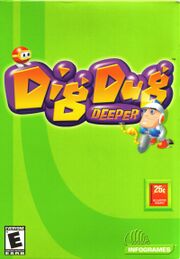 The first 3D installment of the series. Pooka, Elastic Pooka and Fygars are featured.

Dig Dug Arrangement is a port with updated graphics and new enemies. It was first released as part of the Namco Museum Battle Collection in 2005. It was later released for the Xbox 360 and on iOS. 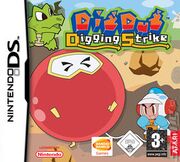 Dig Dug: Digging Strike was released for the Nintendo DS in 2005.

New enemies include a rolling snail, ink-squirting octopus, sleeping bat, digging duck, ice-kicking penguin, dashing pegasus, mud-immune wolf and tongue-flicking chameleon. Pooka returns with a blue variant and Fygar has a red, black and ghost variant. Oddly, the latter is unpoppable but this sprite exists in the game's files.

Bosses cannot be inflated but the penguin boss of island 7 grows fatter when fed by enemies.

A Dig Dug MMO that began in 2008 and was closed in 2009. Pooka and Fygar were found in it. No files of the game exist so the sprites seen below were restored from screenshots.

Red Fly Studios created a small handful of proof-of-concept prototypes for the Nintendo Wii, with each prototype being based off of another company's property. Dig Dug was one of these games.

Pookas and Fygars are the only enemies featured in the prototype.