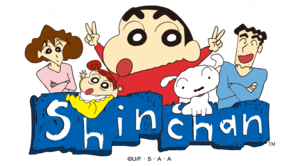 Crayon Shin-chan (or more simply known as Shin-chan) is a manga series written and drawn by Yoshito Usui, which originally ran from August 1990 to February 2010 until a new series titled New Crayon Shin-chan began in August 2010.

The series primarily focuses on the crude, comedic, and raunchy situations of a 5-year-old boy named Shinnosuke Nohara (who often goes by "Shin") alongside his parents, baby sister, dog, and friends from school.

An anime series based on the manga was produced by Shin-Ei Animation in April 1992 and is still currently airing with over 900 episodes. Several animated films based off the anime were also produced and have been released annually since July 1993.

Misae tries dieting after fantasizing about gaining weight, but soon succumbs to the stresses of day to day life and orders a pizza.

The Noharas overeat during their vacation.

Shin gains weight after excessively eating and tries hard to lose it to impress Nanako.

Shin-Chan and Misae both overeat at a buffet.

The Noharas host a dinner party.

The Noharas clean out their refrigerator, resulting in a lot of food that needs eating.

The Noharas compete in an eating tournament. 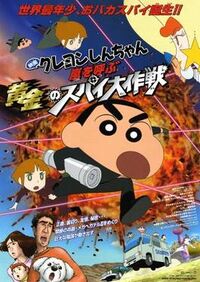 The Queens of the Republic of Sukashipestuan test their MegaBomb II solution on Shin and his family, causing them all to swell up with gas.

Later on, Shin and Lemon eat even more of the MegaBomb II solution to dispose of it, forcing them both to swell to an immense size and effectively destroy the Queens' facility. The Queens are then ultimately defeated shortly after Shin and Lemon force them to ingest the formula themselves and subsequently bloat before blasting off into the sky.