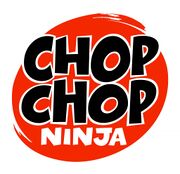 Chop Chop Ninja is an animated series based on an iOS video game series. It began with a series of shorts titled Chop Chop Ninja Challenge in 2014, later becoming a longer television show in 2018. The show follows four young ninjas—Iro, Jo, Neeko, and Tetsuo—who train to become the legendary Chop Chop Ninja and fight enemies who threaten their home of Rizon.

Iro rescues a woman's pet, not knowing it's a snake, and it ends up eating him.

Iro throws Yuki into the reprogrammed Chillbot, and she destroys it from the inside.

Komata's plan to take over Rizon is to turn everyone into fruit with a special smoothie, which an amnesiac Neeko helps him with.

Komata and Blob set carnivorous plants in Rizon to destroy and devour the city.