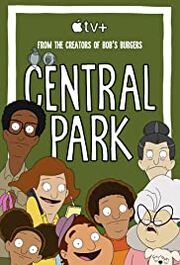 Central Park is an animated comedy series created by Josh Gad in collaboration with Bob's Burgers alumni Loren Bouchard and Nora Smith. It focuses on Owen Tillerman; the fictional manager of Central Park, and his family who must band together to defend against sabotage attempts from greedy property developer Bitsy Brandenham.

The series is a musical, with numbers contributed by a variety of a notable composers.

The Owens are briefly shown stuffed on 'spicy cheesy bread' during the season finale montage.