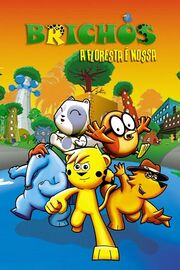 Brichos is a Brazilian animated TV series created by Paulo Munhoz which ran on TV Brasil from April 2014 to January 2016 with a total of 13 episodes. The show’s premise take place in the Village of Brichos, where various anthropomorphic animals live together and socialize.

When Paca wins a beauty contest and claims her secret is not eating at all, several citizens of Brichos take her advice too seriously and become severally thin and malnourished as a result of not eating at all. However, after Bandeira and Jaca save everyone caught in a fire that they were too weak to escape from, they inspire a new diet trend that makes everyone want to be fat instead.