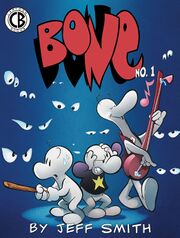 Bone is an American comic book series created by Jeff Smith. Mostly published independently, it ran from 1991 to 2004, with collected volumes and additional comics coming out afterward. It has also won many awards, making it one of the most acclaimed indie comics. The story follows Fone Bone and his cousins Phoney and Smiley, three characters who were exiled from the town of Boneville. They end up in a fairy tale-like land known as the Valley and meet the farm girl Thorn and her grandmother. From there, they become entwined with adventure, magic, and mystery.