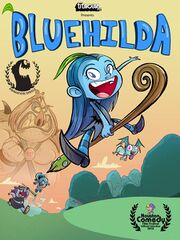 Bluehilda is a short film created by James Sugrue, first shown at a film festival in 2017. The protagonist is a witch child who turned out good due to an improper resurrection. She goes into the woods to capture a dangerous creature for dinner, but has to deal with a trio of witch hunters to save her pet Francis.

When Bluehilda mentions "ten flipping years of her life," she produces a calendar showing herself growing up, including a time of being overweight. Later, when she faces the UnBearables, Slushy gives her the "frost bite" by swallowing her and farting her out, freezing her solid.