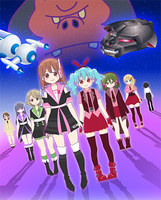 Bishouju Yuugi Unit Crane Game Girls Galaxy is an anime series directed by Tommy Hino, that started airing in October 2016. It is a sequel to Bishouju Yuugi Unit Crane Geeru, in which Mirai, Ayaka, and Kyōko have to save the world from being destroyed by a group of asteroids. They are hired by Sayo, the representative of a shadowy organization, and the organization starts turning them into an idol group. But instead, they are then taken to an arcade.

In Galaxy, Dark Gorilla (the villain of the first show) returns, and a new crane game called ´´Galaxy´´ has been set up to defeat him once again.