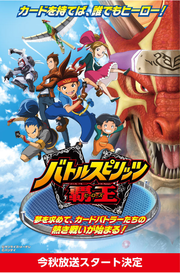 The protagonist is Hajime Hinobori, whose parents built a battle system so that he would be able to see spirits and have them battle. He journeys with his friends and enters tournaments to test his skills. Burst cards are introduced and added in this series.