Banjo-Kazooie is a video game series originally developed in by Rare Inc. in conjuncture with Nintendo until Rare was purchased by Microsoft in 2002. The series predominantly features the titular duo: an anthropomorphic bear and bird respectively that go on various adventures together, often in the effort of foiling their archenemy, a dastardly witch named Gruntilda. 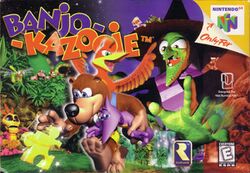 Banjo-Kazooie is the first proper entry in the series originally released for the Nintendo 64 in June 1998, which was also digitally re-released in 2008 on the Xbox Live Arcade service for the Xbox 360.

During the game’s Game Over sequence (which also plays whenever the player quits the game prior to rescuing Tooty) Gruntilda is successful in stealing Tooty’s beauty with her machine, which transforms Gruntilda into a slim and beautiful woman and makes Tooty grotesque and fat.

In the springtime area of Click Clock Wood, Nabnut the squirrel can be seen eating a pile of acorns inside his treetop house. Visiting him in the summer version of Click Clock Wood will show that he has eaten the entire pile, leaving him without any to save for winter and making him too bloated to move. 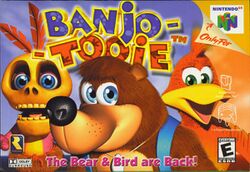 Banjo-Toole is the direct sequel to the original Nintendo 64 title released in November 2000, which was also digitally re-released on the Xbox 360 in 2009.

Both Boggy (as mentioned by his wife, Mrs. Boggy) and one of his children, Groggy, have noticeably put on weight since their first appearance in “Banjo-Kazooie”. Groggy can be found in Witchy World after gorging himself on too much of the park’s greasy food to the point where he needs Banjo to escort him back to his mother. For the remainder of the game, Groggy can be found on his bed in Boggy’s igloo in Hailfire Peaks talking about how full he still is. 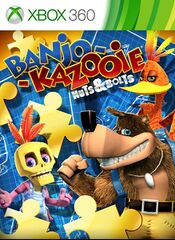 Banjo-Kazooie: Nuts & Bolts is the third installment of the series released in November 2008 on the Xbox 360. Rather than maintain the traditional platforming elements of its predecessors, this installment instead focuses on gameplay centered around building and piloting customized vehicles to accomplish various objectives.

During the beginning of the game, both Banjo and Kazooie are shown to have gotten severely out of shape due to a lack of activity since their last appearance in “Banjo-Tooie”. They remain overweight until the Lord of Games uses his omnipotent power over the game’s program to grant them their original physiques.