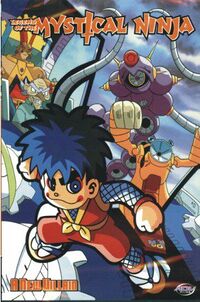 Anime Ganbare Goemon (also known as Legend of the Mystical Ninja) is an anime produced by Trans Arts based on the “Goemon” video game series that ran from October 1997 to March 1998. The titular Goemon, along with his friends, work to protect both the game world and the real world from the vile intents of the Demon Lord Makamuge.

Makamuge sells special diet cakes that at first make people instantly thin, but everyone who eats them soon becomes shockingly overweight. He later uses a gas that causes the same effect with a special variant that also effects robots. The characters return to their original weight in the end