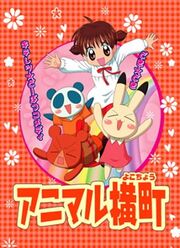 Animal Yokocho is a 2005 anime adaptation of the manga series of the same name by Ryo Maekawa and published by Ribon Mascot Comics. The series begins with the family of 5-year-old Ami Matsuzaki moving into a new house, where she finds a strange trap door that leads to a world of talking animals. She is regularly visited by the trio of Iyo the rabbit, Kenta the bear, and Issa the panda, and they have adventures featuring rapid-fire slapstick and absurdist comedy.

Iyo attempts to clean Ami's room by sucking up the trash like a vacuum, but ends up swallowing all of the furniture as well.

Issa and Kenta eat a gingerbread house in a loose retelling of Hansel & Gretel.

The gang shrink down to the size of ants so they can eat more cake.

Iyo inflates herself until she floats to simulate low gravity.

Iyo inflates herself again later to break her fall.

Iyo is stuffed after several helpings of sushi.

Kenta is stuffed from eating all the green peppers he grew.

The trio are chubby from eating cake.