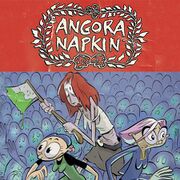 Angora Napkin is a graphic novel created by Troy Little and published by IDW Publishing in 2009. A pilot episode for a potential TV series was created the same year for Teletoon's Pilot Project initiative, directed by Little and former Spümcø veteran Nick Cross, but this series never got produced. A follow-up to the graphc novel, Harvest of Revenge, was published in 2013.

Angora Napkin is the name of a bubblegum pop band composed of three twenty-something girls, Beatrice, Molly and Mallory, who have to stop the undead from dominating the world when trying to get to their concert performance.

In the pilot, Beatrice and Molly find themselves in trouble after eating what turns out to be the entire royal shrimp family.