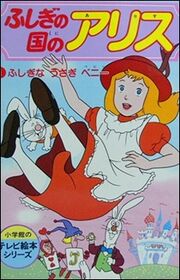 Alice in Wonderland is a Japanese-German animated series produced by Nippon Animation and based on the novels Alice's Adventures in Wonderland, and in the second half of the series Through the Looking-Glass, by Lewis Carroll. It was broadcast in Japan from March 1983 to October 1984. A notable difference in the series to other adaptations is Alice going to Wonderland and returning to the real world at the beginning and end of each episode.

Advice from a Caterpillar (S01E10)

Alice eats a mushroom that makes her grow back to her regular size, but also makes her look fat.