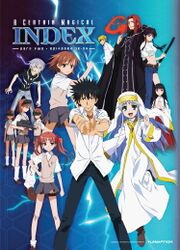 A Certain Magical Index is a series created by Kazuma Kamachi, debuting in 2004. It started out as light novels, then expanded into manga, anime, and other forms of media. There are also several spin-off series, such as A Certain Scientific Railgun. The story is set in a world where people have supernatural powers gained either through science or magic. In Academy City, student Touma Kamijou has in his right hand the power Imagine Breaker, which can nullify the powers of others, as well as his own luck. One day, he meets Index, a nun with the information of 103,000 forbidden grimoires in her mind. As she is running from people who want that information, her meeting Touma gets him involved in the conflict between the city's scientific and magical factions.

A Certain Magical Index: The Movie – The Miracle of Endymion

Index decides the group should have a celebratory meal with Touma picking up the bill.