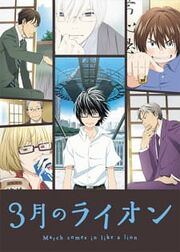 3-gatsu no Lion (March Comes In Like A Lion) is a comedy-drama manga about Rei Kiriyama, a former Shogi prodigy who feels isolated in his Tokyo-based adulthood and the friendship he strikes up with three sisters and their grandfather. It was adapted into an anime in 2016.

The girls get into a 'hot/cold' cycle at a restaurant and overeat. This moment was adapted into the anime but shows even less stuffing-wise.

The gang attempts to eat heathily but ends up preparing too much vegtables and rice.