Pat and Stan (Pat et Stanley) is a French-American CG animated comedy series created by Pierre Coffin, that has aired on TF1 since 2004. The series involves a hippopotamus named Pat and a dog named Stan. 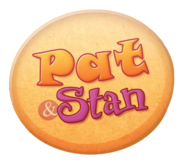 Pat inflates himself to escape from Stan who is looking for him to take him to the dentist.

Pat inflates Stan with a balloon for his "magic trick".

In addition to various shorts, there is also a series of episodes lasting 7 minutes apiece.

Stan inflates from trying to stop releasing bubbles due to a remedy for the mosquito bite on his nose.

File:Pat and Stan - A Button on the Nose (Episode 4)
335 px
Retrieved from "https://bigcartoon.org/index.php?title=Pat_and_Stan&oldid=88178"
Categories:
Hidden category: