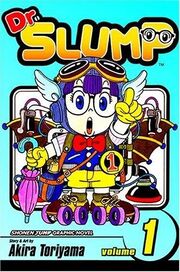 Dr. Slump is a gag manga series by Akira Toriyama and the work that launched his career. The manga ran from 1980 to 1984, and its anime adaptation ran from 1981 to 1986. There is also a remake series, films, games, and novels. Set in the fictional Penguin Village, the series follows the misadventures of a naïve robot named Arale Norimaki and her inventor, Senbei Norimaki.

Akane tells Arale that she'll grow bigger if she eats a lot of food.

The Doctor invents a machine so he no longer has to walk or do chores, but gains a lot of weight after being in it for a month.