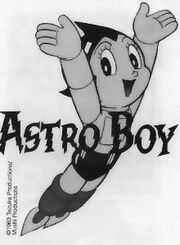 Astro Boy (Mighty Atom) was created by Osamu Tezuka. Originally a manga in 1952, it became the first popular anime series worldwide. There are also anime series that were made in 1980 and 2003, a Japanese live action series (titled Mighty Atom) in 1959, and a Western animated film that was made in 2009.

After Dr. Tenma's (Dr. Boynton in the dub) son is killed in a car accident, he creates Astro Boy, a powerful android with his son's appearance. Astro is later sold to the circus because he is unable to physically grow like a human. Eventually, he is adopted by Dr. Ochanomizu (Dr. Elefun in the dub) and takes up crime fighting.

As Astro Boy fights the robot Sphinx again, his foot gets caught in her mouth, so he inflates her with the rocket.