Street Fighter is a fighting video game franchise that started as an arcade game in 1987. The second installment is credited with giving its genre many of the conventions it has now. In addition to its games, the franchise has animated programs, comics, and such.

In Akuma's story, he fights and defeats Necalli, who then attempts to devour him. However, Akuma destroys him from within with the Mudo Tensho.

Dhalsim's attack, Yoga Sunburst, makes him inhale air until his belly is a round balloon, to then produce fire with his breath.

In his story cut-scene, Birdie eats until he falls in a food coma. 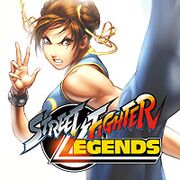 Sakura and Karin compete in an eating contest, but Karin cheats by giving her hot dogs to her assistant.