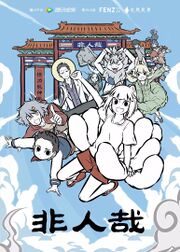 Fei Ren Zai (also referred to as Non-Human) is a Chinese webcomic created by Yi Wang Kong Qi in 2015. It was also adapted into an animated web series that began airing in 2018. It follows a group of creatures and deities from Chinese mythology living in modern-day China.

Xiao Yu has eaten many pumpkins.

Cooking's All About the Fun.

My Schedule has been Chaotic, but I've Grown Fatter and Fatter.

Ao Lie has gained weight and has trouble losing it.

There are Many Ways to Lose Weight, But None of Them Suit You

This Diet is Extremely Unscientific. Please Do Not Attempt to Replicate at Home.

Back to square one again, stupidly standing in front of the mirror

Animated version of the "Monday and Dog" chapter.

Ao Lie has apparently swallowed the rocks Jingwei put in his mouth.

Losing weight is a long and winding journey (E46)